Except as modified hereunder the First Class Playing Conditions for cricket in New
Zealand shall apply in all mates.

1. Duration
The Challenge matches shall be of three (3) days duration, with the team
winning either on the first innings, or outright, being declared the holder of the
Hawke Cup. Bonus points do not apply.

2. Umpires
The Umpires shall be appointed by NZC from the National Umpires panel. In
the event of the Hawke Cup changing hands, NZC reserves the right to make
new appointments for subsequent Challenge matches.

5. Replacement players
(This Rule also applies to Elimination matches).
5.1 Where, after the players in a match have been nominated, any player
is selected by the Major Association (in which his team’s association is
situated) to play in a four day or a one day match or is selected in any
other match which in the ‘player priorities for selection’ hereof has a
higher priority than Series matches and in order to participate in such
or other match he is required to absent himself from the Challenge or
elimination match before it is completed, that player’s team shall be
entitled to substitute another player for the rest of such match and
such replacement player shall be entitled to fully participate in that
match, provided :
(a) As soon as practicable after a player’s selection for a four day
or one day match or other match with a higher priority as
aforesaid is known, his Captain must advise the opposing
Captain and the Umpires of the name of such player and of his
replacement.
(b) A replacement player shall not be entitled to bat in any innings
in which the player he is replacing has already batted and any
player replaced under the provisions of this rule shall be
regarded as having been retired ‘not out’ if he should be
batting at the time when he is required to leave the match and
his replacement shall be entitled to continue such innings.
(c) In the event of the replacement player(s) being unable to
immediately continue the innings the provisions of Law 2.9 will
apply (unavoidable cause).
(d) If a player being replaced has failed to complete an over in
progress at the time when he is required to leave the match,
another player in his team shall complete the over.
(e) A player who is replaced and his replacement may not bowl
two consecutive overs.
5.2 There is no limit on the number of players who may be replaced in a
team during a match under the provisions of this Rule.

6. Player conduct
All players shall be bound by NZC’s Code of Conduct.

7. Notes
Playing conditions for all elimination matches are to be fixed by mutual
agreement of the participants in each zone. 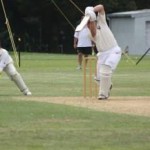