(b) the No Ball was the result of a fielding restriction breach in which case the field may be changed to the extent of correcting the breach.
For clarity, the bowler can change his mode of delivery for the free hit delivery. In such circumstances Law 21.1 shall apply.
The umpires will signal a free hit by (after the normal No Ball signal) extending one arm straight upwards and moving it in a circular motion.
11. LAW 22 – WIDE BALL
11.1 Umpires are instructed to apply a very strict and consistent interpretation in regard to this Law in order to prevent negative bowling wide of the wicket.
11.2 Any off side or leg side delivery which in the opinion of the Umpire does not give the batsman a reasonable opportunity to score shall be called a Wide. As a guide on the leg side, a ball landing clearly outside the leg stump going further away shall be called a Wide. As a guide on the off side, a ball passing outside a line drawn between the bowling and popping creases, measured 432mm (17 inches) from the return crease shall be called Wide. The above provisions do not apply if the striker makes contact with the ball.
11.3 A penalty of one run shall be scored. This penalty shall stand in addition to any other runs which are scored or awarded. All runs which are run or result from a Wide ball which is not a No ball shall be scored as Wides.
11.4 Guidelines and Application
Refer to the HCA-WVCA Premier Limited Overs Playing Conditions.

12. Law 41.6 - Bowling of dangerous and unfair short pitched deliveries
Law 41.6 shall apply however Law 41.6.3 shall be replaced by the following:
41.6.3 The following shall apply:
(a) A bowler shall be limited to two fast short-pitched deliveries per over.
(b) A fast short-pitched ball is defined as a ball which passes or would have passed above the shoulder height of the striker standing upright at the crease.
(c) The Umpire at the bowler’s end shall advise the bowler and the batsman on strike when each fast short-pitched delivery has been bowled.
(d) In addition, for the purpose of this regulation, a ball that passes above head height of the batsman, that prevents him from being able to hit it with his bat by means of a normal cricket stroke shall be called a Wide.
(e) For the avoidance of doubt any fast short-pitched delivery that is called a Wide under this Condition shall also count as one of the allowable short pitched deliveries in that over.
(f) In the event of a bowler bowling more than two fast short-pitched deliveries in an over as defined in paragraph (a) above, the umpire at the bowler’s end shall signal No ball on each occasion.
13. LAW 24 FIELDER’S ABSENCE; SUBSTITUTES
13.1. Fielder absent or leaving the field
First Class Playing Condition 24.2 shall apply except that the maximum penalty time shall be 90 minutes rather than 120 minutes;
14. LAW 28 THE FIELDER
14.1.1 Field restrictions
14.1.1 At the instant of delivery, there may not be more than five fielders on the leg side.
14.1.2 In addition to the restriction above, no more than 5 fielders are allowed outside the fielding circle. If a fielding circle is not marked, this is approximately 30 yards (27.5 metres) from the pitch.
14.1.3 In the event of an infringement of any of the above fielding restrictions, the square leg umpire shall call and signal ‘No Ball’.
15. SCORING REQUIREMENTS
Matches must be submitted via CricHQ by the team named first in the online draw by 6.00pm the following evening. Failing to submit a CricHQ result will result in a $150 club fine or 4-point deduction
16. TEAMS NOT BOWLING THE REQUIRED OVERS
If either team in either innings fails to bowl the required number of overs by the scheduled time for the cessation of the session, play shall continue until the required overs have been bowled. Penalties may be applied by the judicial committee. 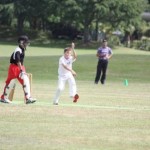