• Final and playoffs over 2 days
• The composite team is eligible for the final.

Starting time set by the host Association. For the two day game play shall not exceed 6½ hours on any day, unless the minimum number of overs have not been bowled. The Tournament Manager may extend the normal finishing time by up to one hour to make up for the time lost because of weather or ground conditions earlier the same day.

May be composed of 12 players, but only 11 may bat. All 12 players are able to field and bowl, but only 11 players are to be on the field at any one time. In the two day game the non batter may be a different player in each innings.

Each team is expected to provide its own set of stump and bails.

4 piece 156 gram balls will be provided by NDC.

Coaches are permitted on the field of play during the drinks break. However, coaches should not take up more time than is usual for a drinks break. The Tournament Manager will reprimand coaches who are time wasting.

due to ground conditions, weather and light.

8. T20 Games. NZC Rules apply. In summary
[a] An interrupted game must have a minimum of 5 overs per side to obtain a result.

[c] Bowling sides are advised that they should complete their 20 overs within 1hr 20
mins. Over rate penalties will not apply, but coaches and captains are asked to
be proactive in meeting this rule.

[d] In the event of a tie, a one over per side eliminator shall apply.

[g] NEW: All No Balls will incur a free hit from the next ball

[h] Wides. Umpires will be asked to be very strict in regard to wides.

 Umpires are instructed to apply a very strict and consistent interpretation in regard to this Law in order to prevent negative bowling wide of the wicket.
 Any off-side or leg-side delivery which in the opinion of the Umpire does not give the batsman a reasonable opportunity to score shall be called a Wide. As a guide on the leg side, a ball landing clearly outside the legstump going further away shall be called a wide. As guide on the offside, a ball passing outside a line drawn between the bowling and popping creases, measured 750mm from the outside of the off stump shall be called wide. The above provisions do not apply if the striker makes contact with the ball.
 In addition a ball above head height of the batsman that he is unable to hit shall be called a wide.

 Bowlers are permitted to bowl TWO fast short pitched deliveries per over. This is defined as a ball which passes or would have passed above shoulder height of the striker standing upright at the crease. Any additional such deliveries are no balls.
 Any delivery on the full above waist height of the striker is a no ball
 A ball that bounces more than twice before reaching the batting crease is a no ball.
 The penalty for a no ball is one run in addition to any other runs scored.
 NEW: All No Balls will incur a free hit from the next ball.

(a) There shall be a lunch break of at least 40 minutes and a tea break of 20 minutes.

(b) 17 overs must be bowled in the last scheduled hour of the match.

(d) If not dismissed, the team batting first shall declare their innings closed at stumps on the first day or at the completion of half the scheduled overs in an interrupted match.
(eg day one only 60 overs are bowled plus 100 min on 2nd day
= 160 overs divided by 2
= 80 overs

 there are no restrictions on the number of overs bowled by a spin bowler
 all other bowlers are limited to a maximum of 16 overs per day and six overs in any one spell. At the completion of a spell, the bowler may not bowl again until the equivalent number of overs as the length of that spell are bowled from the same end.
 Variations in the event of interrupted play, end of a day’s play and inadvertently exceeding the number of overs permitted – consult NZ U19 Tournament Rules.

(g) If less than 50 overs are bowled on Day 1 then that game is abandoned and a one day game will be played on Day 2.

(h) There is no provision for a new ball. The same ball shall be used for the duration of the innings unless the Umpire considers it unfit for play, in which case a suitable replacement may be used.

as defined for 1st class cricket ie The ball is considered wide if the batsman is unable to hit it by means of a normal cricket stroke. Bowlers will be warned if negative leg side bowling is used and further infringements will be no balls.

 Rules for above waist height and more than 2 bounces still apply
 Bowlers are limited to TWO fast short pitched balls above shoulder height per over. Any additional such deliveries are no balls.

The object of the Tournament is to play as much cricket as possible. This applies in the two day games even when an outright result becomes impossible on Day 2. A game cannot be called off until at least one hour before the scheduled close of play and then only if the two teams agree. 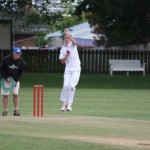