1. Hours and Format
• Hours of play shall be Saturdays 9.30am to 1.30pm.
• There shall be no interval between innings (this can be changed with the agreement of both coaches).
• In all games, each innings shall consist of 30 overs, weather permitting.
• Teams cannot declare their innings closed.
• There must be a minimum of 10 overs available in each innings to constitute a match.
• There may be one drinks break in each innings (after 15 overs), however players will not leave the field and it will last no longer than three minutes.
• Teams are to be at the ground by 9.15am. Any team which arrives late will forfeit one over from their batting innings for every three minutes after 9.30am.
• The second innings must commence by 11.30am even if 30 overs have not yet been bowled in the first innings. The team batting second will have the same number of overs available to them as were available in the first innings.

2. Teams
• Teams may be composed of 12 players, but only 11 may bat.
• If a team is composed of 12 players, a nominated non-batter and non-bowler must be provided. This cannot be changed after the toss.
• The wicket-keeper cannot be nominated as the non-bowler. The non-bowler may still field.
• This can be expanded or changed with the mutual agreement of the coaches.
• At the commencement of play a minimum number of seven players are required to be present in order to constitute a team. Failure to have seven players constitutes a default.
• Any players who have played more than twice in the Colts grade will not be eligible for awards for Premier Year 9 & 10 teams. Any player playing in Colts, Division 2 or Division 1 competitions shall not be able to play more than two games in any grade and then move to a lower grade.

3. Points and Placings
• To constitute a competition, three full rounds must have been completed. For a round to be deemed completed, at least half the games from that round must have achieved a result.
• The points received by each team shall be as follows:
- Win: 4 points (including being on the receiving end of a default)
- No Result: 2 point
- Tie: 2 point
- Loss: 0 points
• Where teams have the same number of points, placings will be decided on net run rate. The points table will be available on the HCA website and CricHQ throughout the competition.
• When scores are tied in the semi-finals and final, the winner shall be determined by the following:
- The team scoring more runs per wicket lost will advance.
- Where runs-per-wicket are equal, the team scoring its runs at a faster rate per over batted will advance.
- If the teams are still equal, then whoever was placed higher in the round-robin will advance.
• If the semi-finals are abandoned without achieving the 10-over minimum to constitute a match (or not played), the team placed higher in the round-robin will advance.
• In the final, if the match is abandoned with no result (or not played), the team placed higher in the round-robin will be declared the winner.

4. Equipment
• Two-piece, 156-gram Kookaburra balls must be used, irrespective of the surface being played on. Old balls may be used, however they must be of reasonable standard, and both coaches must agree to this.
• Neatness and uniformity of clothing are an essential requirement.
• Protective gear is required:
- It is mandatory that all batsmen wear helmets.
- All wicket-keepers must wear approved full-face helmets when standing up to the wickets.

5. Bowling
• No bowler may bowl more than 5 overs, or more than one-sixth of the total overs in a rain-shortened innings.
• In a match where an innings is shortened and the new total overs is not divisible by six, one additional over shall be allowed to the minimum number of bowlers. (E.g. in a 21-over match three bowlers may have a maximum of four overs, and no other bowler may have more than three overs.)

6. Batting
• LBWs will apply.
• Batsmen do not have to retire.

7. Extras
• Short pitched deliveries: If any ball delivered by a bowler, excluding a spinner, passes or would have passed over the shoulder of the striker standing in their normal batting stance at the crease, the square-leg umpire shall call and signal no-ball, whether the batsman hits the ball or not.
• Full pitched deliveries: If a full pitched ball, irrespective of pace, passes or would have passed on the full above waist-height of a batsman standing in their normal batting stance these deliveries will be called and signalled no-ball by the square-leg umpire, whether the batsman hits the ball or not.
• Wides: A ball deemed to have passed more than 200mm outside the leg stump will be called a wide. Off-side wides will be called if the batsman cannot reasonably reach the ball while playing a normal cricket shot. A wide cannot be called if the batsman makes any contact with the ball.
• Scoring extras: No change has been made to how wides are scored. However no-balls are now scored with any runs off the bat or through byes or leg-byes scored separately. I.e. previously a no-ball plus one bye was scored as two no-balls. It will now be scored as the no-ball extra, with any other runs scored as a bye or leg-bye extra.
• Double bounce: If a ball bounces more than once between the batting creases this will be called no-ball.

8. Dead Ball
• Dead ball will be signalled if, in the opinion of the umpire, a delivery has deviated off the edge of an artificial pitch or any other obstruction (e.g. burnt hole in the matting, stone on the pitch). No runs or extras shall be credited, and the ball will be re-bowled.
• A dead ball cannot be a wide; i.e. you cannot score any runs from a dead ball.
• A ball returned from a fielder back to the wickets (either end) that hits the edge of the concrete and is deemed to be unfair because it deviates in an awkward or dangerous angle, the umpire shall call dead ball, and any runs scored after that call will not count. Any runs scored prior to the call, including the run being completed when the call is made, will count.

10. Rain Rule
• Play will not commence in rain, and if players should leave the field after the start of play because of rain, play will not recommence until the rain has stopped or both captains agree to play on. There should not be any pressure placed on captains to continue playing in rain. Player welfare must come first.
• To calculate the target score in the event of rain, the following will apply to give the side batting second a target score. One more than the target score is needed to win the game. The total score of the side batting first shall be averaged over 30 overs and then multiplied by the overs left in the day’s play calculated back from the official finishing time at three minutes per over (remembering a minimum of 10 overs must be bowled).

11. Scoring
• Results must be submitted via CricHQ. The team named first on the online draw is required to do this.
• Scorebooks or tablets are to be scrupulously maintained with full names written and cross-checked by both teams. Scorers should receive training in this to ensure accuracy.
• Northern Districts can provide free CricHQ training for scorers and administrators at our office. Please contact competitions@ndca.co.nz for more details. 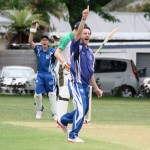