The fierce rivalry between Bay of Plenty and Hamilton went up a notch over the weekend when they came together for the first time this season.

After a soggy start at Blake Park, Hamilton won the toss and put the Craigs Investment Partners Bay of Plenty men’s team into bat. Tight bowling from the opening duo of Nick Farrell and Cooper Rowell starved the bay of runs and they found themselves one down with 10 on the board in the 5th over.

Taylor Bettelheim and Blair McKenzie came together and formed a much needed 39 run partnership but quick wickets on a pitch that offered enough for the seam bowlers made things difficult for the home side as they slumped to 106/8 in the 48th over.

Veteran Pete Drysdale got stuck in and along with David Hancock put on a stubborn 45 run partnership which helped them climb to a total of 155 all out. Josh Brown was the pick of the bowlers with 4 wickets at an economy rate of 2.17.

Hamilton’s innings got off to a shaky start as they found themselves 2/1 in the 2nd over. Things only got worse for the gold and blacks as wickets fell at pace and by the 33rd over, they were 61/6. Needing some magic, Freddy Walker and Kuwyn Price came to the crease and a mammoth 161 run, 7th wicket partnership was established.

Some big hitting in the 78th to 81st overs (63 runs) saw Hamilton surpass the Bays total and take first innings points. The bowlers persevered and Dominic Crombie was rewarded with the prized wicket of Walker (76) and Hancock struck twice in 2 overs, clean bowling captain Matt Whitley and then getting Price (88) lbw. Special mention to 16 year old Ewald Schreuder who contributed a handy 17 off 26 balls at 11 on debut.

Bay of Plenty then navigated 19 overs in their 2nd innings with just the loss of Bettelhiem before the teams shook hands. 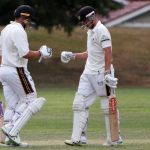 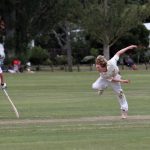