After spending most of the season thus far in lockdown, the Hamilton Cricket Clubs came out with guns blazing for round 1 of the Hec Holland Plate.

Back on grass at Galloway Park, Gallagher Melville won the toss and sent Fraser Tech in to bat first. Their decision was rewarded straight away when Cooper Rowell struck first ball, dismissing Ryan Smith for a golden duck. Jake Clare and captain, Jack Devane stabilised the innings and a 6th wicket partnership of 74 from Josh Dinan and Andrew Carney helped Fraser Tech to a competitive total of 200. Rowell ending up with a 5 wicket haul at an economy rate of 3.96.

Gallagher Melville came out swinging and the opening pair of Kairav Bhatt and captain, Callum Hill putting on 50 before Josh Dinan took the prized wicket of Hill. Thanvir Alkhan continued on the good work with the bat, falling just short of his half century and a partnership between Jack Collins and Cooper Rowell late in the innings helped get Melville across the line.

Meanwhile on Galloway 1, Star University won the toss and also decided to bowl – sending last seasons runners up, Marist Suburbs in to bat.

Ben Morris-Brown struck early, dismissing Marist Suburbs opener Gogal Basu in the 3rd over for a duck. However, it was the Alex Clare show for rest of the innings as he batted right through – finishing up on 94 not out after 208 minutes in the middle. Handy contributions for Jayden Purcell (16), Nick Farrell (37) and Mike Dodunski (17) helped their team to a competitive 199 after 50 overs.

An opening partnership of 53 from Elliot Santner and Haydon Black got Star off to a great start but tight bowling from the Marist bowlers restricted the sides scoring ability and despite a cameo from Adam Winter, who smashed 25 off 19 including 2 6s, it wasn’t enough to chase down the total – falling short by 50 runs.

Over at Hamilton Boys High School, defending campions Hamilton Old Boys won the toss and sent a youthful Boys High side in to bat first. Aside from an early wicket in the 3rd over from the experienced Anurag Verma, wickets were hard to come by for the Old Boys side – who utilised 7 of their bowlers in the 50 overs – they did however manage to restrict the runs with 201 dot balls. An outstanding knock of 79 not out from captain Ethan O’Donoghue helped set a target of 163.

Hamilton Old Boys didn’t waste any time chasing down the runs with Jitender Singh and Satvir Singh putting on an opening partnership of 41. Sing was bowled by Christopher Steel in the 9th over which brought Northern Districts A representative Josh Brown to the crease who contributed a quick fire 33 to help Old Boys win by 5 wickets and secure a bonus point. 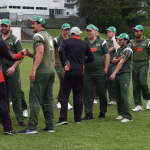 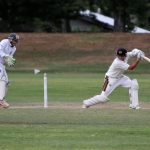